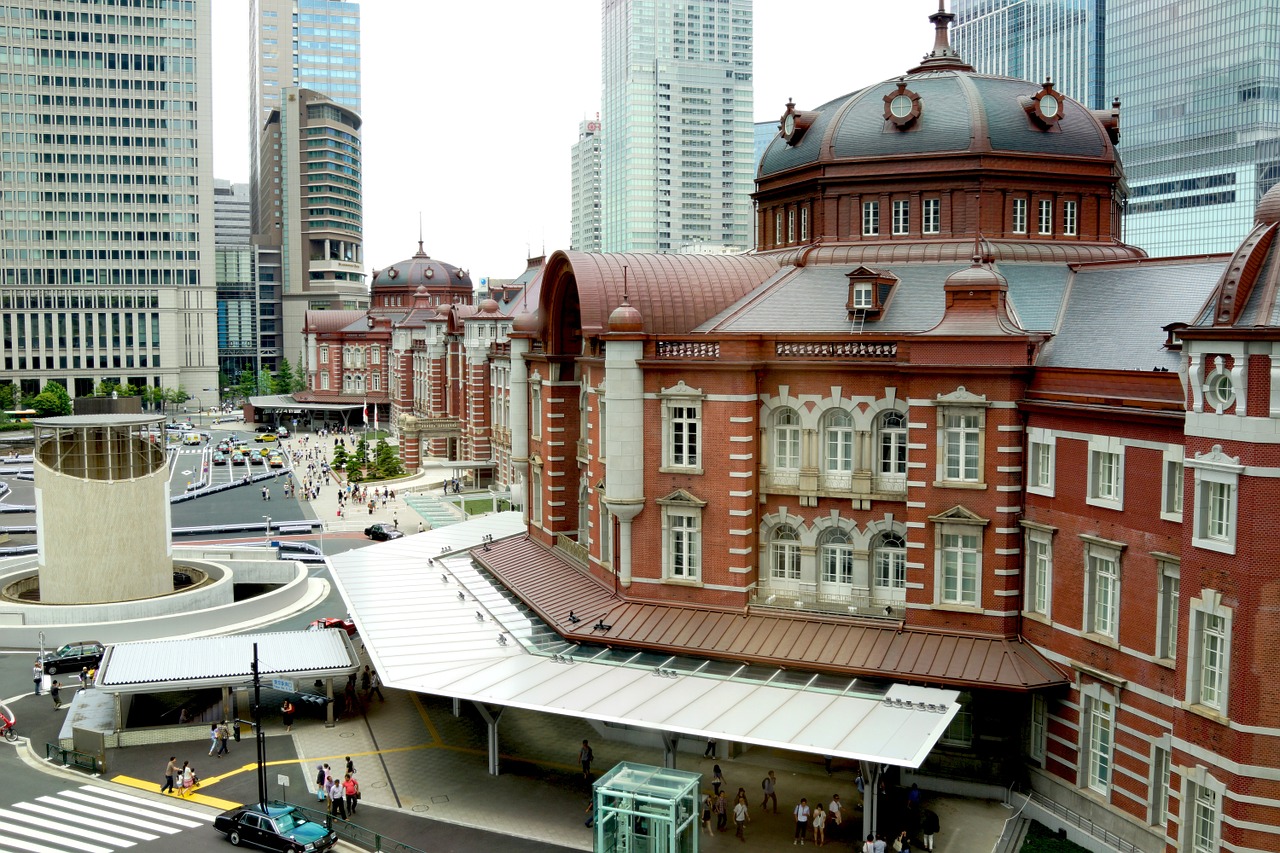 Tokyo Station or Tokyo eki (東京駅) is the main rail transportation interchange in the capital of Japan. In addition, it also serves as a departure point for a number of bus and coach lines that serve other cities in Kanto Prefecture and other parts of Japan.

But it is not only interesting because it is a large transportation interchange. The building itself is a real beauty and worth a visit, especially after its restoration in 2014.

Also, 4000 trains pass through this station every day, which is the record in Japan. In terms of passenger numbers, it is the third busiest station with over 2.2 million passengers per day, behind Shinjuku and Ikebukuro stations.

The station has grown so much that it is now referred to as the Tokyo Station City complex, which includes not only the station but also all the shopping, entertainment, dining and art facilities in a 180,000 square meter area.

We are talking about a railway, commercial and cultural complex that includes the historic and restored original red-brick station building, as well as 28 different platforms.

The first railway line in Japan started from Shimbashi Station, not far from the present location of Tokyo Station. Then a line was built to the north from Ueno. But there was no connection between them, so in 1889, it was proposed to create a line connecting them, and in 1896, it was decided to build a station on this line at the place where Tokyo Station is today, under the name of Central Station.

The construction of the station did not begin until 1908, due to delays caused by the first Sino-Japanese war and the Russo-Japanese war.

Its architect was Tatsuno Kingo, who also designed the Bank of Japan building, Manseibashi station or the Iwate Bank building in Morioka.

The station was officially opened on December 20, 1914, with a beautiful three-story red brick building, very typical of the time, with Western influences and Japanese details. At that time, it had only 4 platforms, not 28 as today, and there was only what is now called the Marunouchi side.

This was more than enough for the volume of lines and passengers. The Yaesu side was not inaugurated until 1929, but in that case with a completely different architecture than the one we can see today.

Tokyo was bombed on May 25, 1945 with incendiary bombs that destroyed much of the city. Tokyo Station was not spared and was almost completely destroyed, including its spectacular vaults, although it was rebuilt the following year. However, the vaults were replaced with angled roofs, which were simpler, cheaper and easier to build, and the reconstruction removed the third floor of the station.

The Yaesu side was also rebuilt after the war but was again damaged by fire in 1949. Later, the whole area was modernized with new platforms, contemporary architecture buildings and a large Daimaru shopping mall, which opened in 1953.

During the prosperous years, it was even planned to connect Narita Airport to Tokyo by a high-speed train. This train was also planned to connect Tokyo Station to Shinjuku Station by a tunnel that would make a detour to avoid passing under the Imperial Palace. Part of the work was undertaken, but as it was impossible to obtain all the land for the project, the plans were abandoned.

However, the area where the shinkansen platforms were to be located did not fall into disuse. Since 1990, the Musashino and Keiyo lines have been running there. The latter is connected to the Kasai Rinkai waterfront park and to Tokyo Disneyland and Tokyo DisneySea. If you visited it, you were probably surprised by the long underground walkway between the platforms and the exit of Tokyo Station.

Renovation and restoration of Tokyo Station

In the 1980s, the plan was to demolish the station and replace it with an entirely new one. Fortunately, protests made the plan reconsidered and today you can enjoy the original building as it was in 1914. This original building was declared a property of cultural interest in 2003 and its restoration began in 2006, so that it would be ready for its centennial in 2014.

Indeed, in October 2012, work was completed on the Marunouchi side, which was restored to its pre-war appearance, with the vaults above the north and south exits looking as they did before the war.

Thus, during this renovation and restoration work, the capitals of the columns on the second floor were removed and placed on the new third floor. The granite ornaments on the capitals and balustrades were also restored to their pre-war appearance.

The roofs were also redone, replacing the metal tiles of the post-war reconstruction. The new thin tiles were laid one by one by hand.
In addition, the building’s structure was rebuilt in reinforced concrete and bricks were added to the exterior of the third floor while those on the existing floors were maintained and restored. A wall on the railroad side of the building was also removed.

This way, travelers entering the station can see the building as it was when it was built. And earthquake prevention measures, including oil-based seismic dampers and insulation between the building structure and the underground portion of the building, were also included.

A year later, in 2013, the Yaesu side renovation was completed with the opening of GranRoof. GranRoof is a 240-meter-long shopping area that connects the two towers jointly called GranTokyo, the north and south towers.

It is also highly visible from afar because of the large covered area that covers it and tries to convey the idea of a candle of light. But it not only has commercial areas, but also a pedestrian area.

The area around the historic building was also renovated between August 2014 and December 2017. The first “city square,” later renamed Marunouchi Central Plaza, resulted in the creation of a 6,500-square-meter pedestrian area paved with white granite.

How to get to the station?